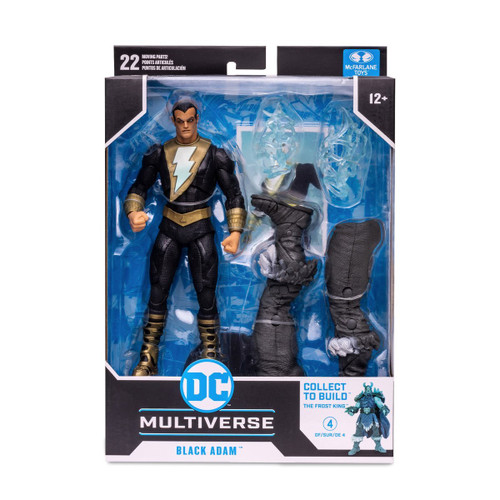 Channel the powers of ancient Egyptian gods! This DC Build-A Wave 7 Endless Winter Black Adam 7-Inch Scale Action Figure is based off his look in the Endless Winter comic. Black Adam comes with 2x lightning accessories and a base. The 7-inch scale figure is designed with ultra articulation with up to 22 moving parts for full range of posing and play. Also included is a collectible art card with figure photography on the front, and character biography on the back. Black Adam includes 1 of 4 pieces that when combined with the rest of the Endless Winter Build-a line (sold separately) will assemble The Frost King.

Centuries ago, the same wizard that granted Billy Batson the powers of Shazam!, bestowed mystical powers upon a pure-of-heart youth in ancient Egypt. But when the boy tried to share his power to save his dying uncle, his uncle stole it and became the legendary Super-Villain known as Black Adam! Black Adam has the same magical abilities as his Super Hero nemesis, Shazam!, but Adam's powers come from the Egyptian gods. Shu grants him stamina; Heru, speed; Amon, strength; Zehuti, wisdom; Aton, power; and Mehen, courage. Black Adam can also fly and is virtually invincible. Ages 12 and up.