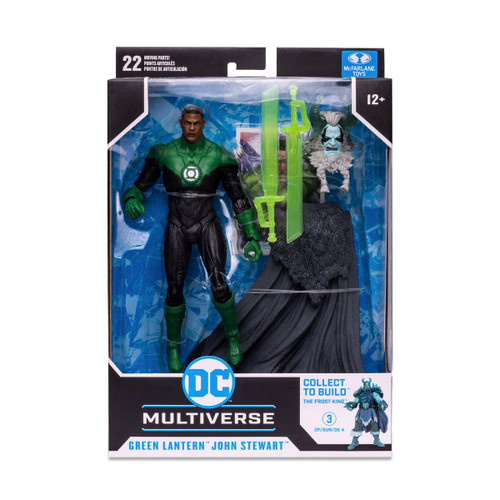 This DC Build-A Wave 7 Endless Winter Green Lantern John Stewart 7-Inch Scale Action Figure is based off his look in the Endless Winter comic. John Stewart comes with 2x Light Projection Swords and a base. The 7-inch scale figure is designed with ultra articulation with up to 22 moving parts for full range of posing and play. Also included is a collectible art card with figure photography on the front, and character biography on the back. Green Lantern includes 1 of 4 pieces that when combined with the rest of the Endless Winter Build-a line (sold separately) will assemble The Frost King.

John Stewart is a former U.S. Marine who uses his military training and discipline to protect Earth, and the rest of Space Sector 2814, as a member of the intergalactic peacekeeping force known as the Green Lantern Corps. As Green Lantern, John wields a power ring, which creates a protective shield around him, allows him to fly, and generates hard-light energy constructs in the form of anything he imagines. Fueled by willpower, Green Lantern's power ring is one of the mightiest weapons in the universe! Ages 12 and up.